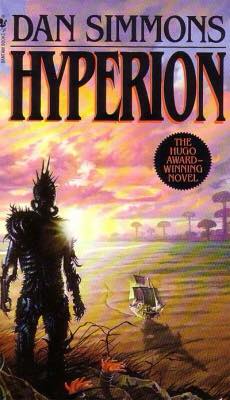 One of the main themes in Dan Simmons’ Hyperion Cantos is how humanity’s future among the stars may be affected by artificial intelligence (AI).

“Simmons wants us to know that while AI is potentially highly toxic, malignantly thrashing about in its own depth, conversely it can cast light on the mind-soul scoop that lies paradoxically at the heart of man’s nature.”

In Hyperion Cantos’s vastly drawn space opera, to use that much maligned expression, half of mankind has become dependent on AI in return for access to the stars through ‘farcaster’ portals, colossal AI designed constructions that allow instantaneous space travel between regions of space. While the other half of humanity, the Ousters, have rejected AI co-dependency and retreated into deep space where they have adapted physiologically to zero-gravity, accepting the challenges of their environment and in so doing evolved into sylphian-like creatures.

The characters in Hyperion Cantos are prepossessing and well-defined. And even the incidental characters are intriguingly freakish like Rachel, the daughter of Sol Weintrab, a Jewish scholar, who Benjamin Button style, regresses backwards from early adulthood to a baby infant. Then there is the AI robot, Johnny, who is the computerised reincarnation of the dead poet, Keats: a programme designed by ‘TechnoCore’, AI computers, to discover what makes humans unique. The ‘cantos’ plot device, allows us to enjoy the story from various perspectives. Each character reveals a different home world in the Hyperion universe. The soldier Fedmahn Kassad of Palestinian origin from Mars is particularly engaging, taking us into a virtual military training programme. There he participates in a re-enactment of the Battle of Agincourt. The character of the poet, Martin Silenus, is also very entertaining with a truly improbable but amusing tale of rags to riches as he rises to the heights of literary success, only to fall back into dissipation and eventual obscurity . But all the tales here are convincing and delightfully absorbing.

“Humans have lost the high ground and are now in thrall to their machines, happy to cohabit on an analogous digital dual carriageway where they still have access to the internet. but not the inner ‘dataplume’ traffic where the real processing occurs.”

The descriptive settings for each pilgrim’s story brings these alien worlds alive, ranging from unspoilt ocean paradises, to huge lush sweltering jungle savannahs, or vast spaceships floating silently in zero-gravity, inner-city urban sprawls in futuristic technology-dependent cities fronting slums and hiding congested sewers, or even intriguingly, the dark grid-like inner-recesses of ice-cold artificial intelligence. Simmons, a gifted story-teller, has the ability to create ambitious new vistas through his imagination and the shifting tones of his voices. This is an ambitious book which seeks to look at where humanity’s obsession with technology, our limitless desire for the material advantages it brings, will take us.

Like all good science fiction, it is a book of startling inventions. Such as the way Planck’s constant is referenced to describe the smallest regions of ‘time and space’, and hence how space travel might work through our understanding of the Higgs Boson: ‘That foam of quantum fluctuations which binds the universe together and allows the wormholes of farcaster, the bridges of fatline transmissions! The ‘hotline’ which impossibly sends messages between two photons fleeing in opposite directions.’  The ‘science’ makes the ‘fiction’ more compelling in Simmon’s created universe by showing us plausibly how it is held together through the ‘farcaster’ portals.

Another invention, perhaps more visually arresting are the tesla trees, aggressively spewing out electricity on the unwary:

At least a hundred arcs of electricity must have been released in the first ten seconds of the tesla trees’ opening spasms of violent energy…a dozen bolts of lightning from the nearest tesla arced to the hapless animal. For a mad second I could have sworn I saw the beast’s skeleton glowing through the boiling flesh and then it spasmed high into the air and simply ceased to be.

While visceral details keep the tension high and the narrative gripping, metaphysical questions are also dealt with. In one episode, after a bout of lovemaking, the tough female private detective Brawne Lamia, catches in her lover’s eye, the Keat’s robot, ‘the emotion and passion of that moment’. Simmons wants us to know that while AI is potentially highly toxic, malignantly thrashing about in its own depth, conversely it can cast light on the mind-soul scoop that lies paradoxically at the heart of man’s nature.

In Hyperion Canto’s vision of the 28th century, an awkward alliance between man and machine exists, in which humans have lost the high ground and are now in thrall to their machines, happy to cohabit on an analogous digital dual carriageway where they still have access to the internet, and ‘farcaster’ transport between worlds, but not the inner ‘dataplume’ traffic where infinite numbers are crunched. Computer processing now occurs over vast inter-planetary matrices beyond the capability of the human mind to navigate. Humanity has reached out to the stars but only by becoming enslaved through its dependency on technologies it can no longer manage, let alone create. It’s a fascinating vision, a powerfully evoked homage to what the author calls the ‘Gibsonian matrix’, after William Gibson’s Neuromancer, in which the World Wide Web has been superseded by the TechnoCore, a computer AI made up of vast networks of data that interrelate. Here, as private detective Brawne Lamia discovers, AI seeks to create a super intelligence (UI):

‘It is part of the TechnoCore’s project going back at least seven hundred standard centuries to realize the Ultimate Intelligence.’

‘The Ultimate Intelligence,’ I said, exhaling smoke. ‘Uh-huh. So the TechnoCore is trying to…what?…to build God.’

This desire to overcome or side-step the Creator has always been a theme of science fiction stretching back to Mary Shelley’s Frankenstein. In cyberpunk fiction the new Enfant terrible, turned wannabe universal CEO, is AI. In Hyperion Cantos this is explored by taking the reader on a journey into the vast icy voids where internet matrices of a self-aware AI spread across planets, guarded jealously by dark angelic machine guardians:

I could hear the black threats of the hulking security phages; I could smell death on the breadth of the counterthrust tapeworm viruses even through the ice screens; I could feel the weight of the AIs’ wrath above us – we were insects under elephants feet – and we hadn’t even done anything yet except travel approved dataways…sucked into a vacuum like insects in an oceanic vortex…We were being sucked into something colder and blacker than any void in our reality could ever be…into what? Frozen mountains of fireworks. Transparent mountain ranges of data, endless glaciers of ROMworks, access ganglia spreading like fissures, iron clouds of semisentient internal process bubbles, glowing pyramids of primary source stuff, each guarded by lakes of black ice and armies of black-pulse phages.

It is a hellish Blakean vision of the internal matrix of AI intelligence where, beyond our own capability to compute or process, data has become self-aware enough to become utterly single-minded and evil. To this end, and quite shockingly, AI, in the body of the Shrike, raises a kind of gargantuan crucifix, or tree of death, where humans, marshalled like animals, are physically bound to it by the spikey steel automaton. There to suffer in perpetuity, imprisoned in a time machine, the time bombs, which travel backwards and forth in time. This horrendously macabre contraption exists to lure the God of empathy into a confrontation with Ultimate Intelligence, a baser construct of our selves. This is inventive well-constructed fiction with a dark sense of humour that in places verges on the diabolical.

Units called quantum time and quantum length. These are the smallest ‘regions of time and space’ which can be described meaningfully. Imagine, a Planck second is 10743 and a meter is 10735.

A blog full of tips, inspiration and freebies!

Musings and books from a grunty overthinker